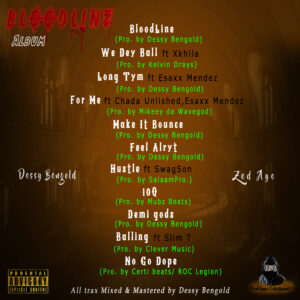 This Duo has no doubt made a loud statement of who they are: skillful lyricists working hard to take over the game.
“Blood Line” Is an 11 track Hip Hop Project with a fusion of Afrobeat, beautifully crafted for your listening pleasure.

You can Support Hoodgame by paying via the Link below

Spread the love
SCOTS released his much anticipated single titled “Somebody”.

After a year and many months, SCOTs decide to come back with something different from what he is known for, an energetic rapper. He is back with a sensational sound that will surprise you of what he can do on a

Spread the loveAb Vocalz release his much anticipated Single titled” with the cloud’s”.
Ab Vocalz: signed to Evangel Art’s, is a consistent music artist from Plateau State, Nigeria. Using his talent to the glory of God.
With the cloud’s is a powerful song produced by Jeff beats
Listen, download, watch and share

Spread the loveBorrow Borrow the new tune was inspired by Nigeria’s current situation where most youths out there are Jobless and Left with no option than to Beg or *Borrow*…..
The writer *XNYPA* is a talented West African Writer, Singer, and Rapper Based In Jos – Nigeria.
His type of music is quite different and

Song of the week: Show me road by Lex

Project of the month: Diary Of A Christian Rapper (The EP) By Decious, Rap Reverend & Princstar

Diary of a Christian Rapper (The EP) by Decious, Rap Reverend & Princstar

Artist of the Month