Heavenly Dawap releases the track list of the much anticipated project of the year CARRY YOUR CROSS and talk more about it.

Indeed CARRY YOUR CROSS The mixtape is very personal to Heavenly Dawap Just by looking at the track list.

The track list alone is a story of a journey. Heavenly Dawap AKA Yaron Jtown Just released the track list to his coming mixtape Album titled “Carry Your Cross”. 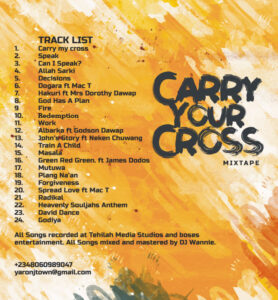 He said, “People have been telling me that the tracks are too much, people don’t have time to listen that much in our generation, you are wasting songs, laughs“.

Heavenly said he see this Mixtape project like a book in the Holy Bible. He said “Imagine the book psalms having half of it’s content because people think it is too long, Just like the Scriptures, you need time to study this mixtape album.

This mixtape is a project that will stand the test of time and generations to come will still study it”. 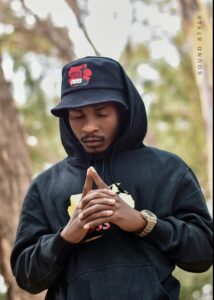 Heavenly Dawap believes every song is a message to someone out there and everyone must not connect to every song but listening to the whole project gives you the full picture of “CARRY YOUR CROSS” mixtape.

Spread the love“CARRY YOUR CROSS” The mixtape Album By Heavenly Dawap AKA Yaron Jtown Is Heavenly Dawap’s first Gospel Project.
The album is a complete Hip Hop Mixtape Album. Quite personal to Heavenly, he said the Album is about denying self to accept the will of God, it also talked about love, forgiveness, peace, unity,

Spread the loveDo you have a gospel video single and you wish to participate in the most prestigious GOSPEL VIDEO AWARDS?
The 2019 Praise Music Video Award is here again.
Pick your form today at the rate of #2000,
open from 1st Oct to 30th Oct.
@ Gowons Microfinance No: 1 NOAD AVE, Jos Plateau

[Download] Spokesman – Heir To The Throne (The EP) Zip

[Download] Spokesman – Heir To The Throne (The EP) Zip

Album of the Week: Jayne Jatson: Yours & Yours